The Invasion of the Imagination by Mechanized Man and Robots

In the debate over euthanasia and eugenics, raging now for more than three decades, it is not enough for us to line up our arguments for or against a law that would legalize these practices. We must also understand the nature of the debate on which we have embarked, in what realities we are already complicit, and what we are renouncing when we adopt one position or another. For the moment, let us note the power of the wave that carries euthanasia and eugenics in its wake. This wave is the result of the convergence of a large number of currents.The invasion of the imagination by mechanized man and robots is one of them.

Read also
Euthanasia and Eugenics : Issues with Far-Reaching Effects
The Evolution of our Connection with Objects
The evolution of the connection with old age, death and suffering
Midas the Dis-enchanter, or Instrumental Reason
The Bird that tells the Hours

From the man without a face to a life without value there is only, we would suggest, a single mysterious step. If in man there exists one infinitely precious thing that grounds his dignity, it is certainly that he expresses himself by his face above all, indeed so well that we are obliged to ask ourselves if we can represent man without a face without degrading him. Because it is the impact of the representation of human beings on the imagination that is at issue here, we must first consider the most dominant current expressions in this realm, those of film, television, and the Internet. On television, we see more and more frequently, in advertisements in particular, schematic representations of human beings. Pictograms that make people look like robots rather than beings able to express feelings and thoughts through and on their faces. If it is a matter of indicating an exit door, perhaps it is a better idea to use a schematic than a subtle design, because the representation is being used there only in the service of a utilitarian goal. But the use of the pictogram extends far beyond the utilitarian. We are complicit in the representation of the human being without a face.

The most prized trophy in the world of film is the celebrated “Oscar.” Originally, this statuette, made of gold-plated britannium, did not have a name, a reality well suited to the statue, because it had no face then and still has none. Harriet Herrick, a member of the American Academy of Motion Picture Arts and Sciences, saw a resemblance to one of her uncles, Oscar, in the statuette and so it received its nickname. Ever since, therefore, American cinema – and therefore the world’s cinema – has rested on a misleading symbol: the name of a person given to a thing, because a human body without a face is really only a thing. But let us be precise here: Oscar is not completely without a face. On the side of “his” skull, there are plated geometric figures resembling a mouth, eyes, and a nose–but this is a false representation. The figure remains denuded of all expression–it would have been preferable to leave it bereft of human traits. Oscar is a robot, the ancestor of all other robots who would thereafter people American cinema. And there are more and more of them. If we add to them all the monsters, all the machines, all the animals, more or less animated and disguised with comic faces that only reproduce the mechanical and schematic dimensions of feelings, one cannot but think that the robot has already won the battle for the imagination. The Internet has introduced the accomplice of the “emoticon,” the pictogram that can be manipulated, with the circumflex accent expressing gaiety or sadness depending on whether it is upright or inverted.

I will be reproached no doubt for not being “with it,” for not being in tune with the age, for not having understood that here–where I see a triumph of the robot–I should instead be amazed, confronted by life invading machines and humanizing pictograms. I respond only that the question of the man without a face demands to be asked, if only so that we might conceive of animations that enrich the imagination rather than cause it to wither. 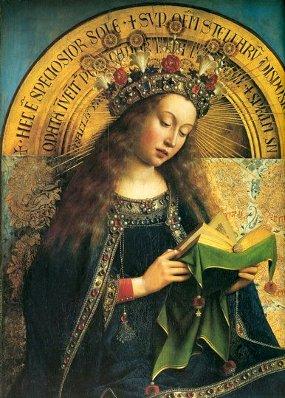 One day I visited a friend in the hospital. He knew that he was fatally ill, and he received me while attached to a renal dialysis machine. He was mentally intact and only had one desire: to contemplate Van Eyck’s Mysterious Lamb. I offered to bring him a reproduction of the painting the next day. Other friends had done the same. Our dying friend was enraptured by them. Would the representation of a man without a face have brought him the same joy? Philosopher Jean Onimus thinks it would instead have plunged him into despair. “There is a painting of Picasso’s titled Portrait of a Man (a title of no small and sinister irony) that depicts a toreador. But of the man there is only a three-cornered hat and epaulettes: the rest is nothing more than a maze of flesh-coloured swirls, laboriously applied with meticulous care and artisanship. Instead of a face, a horrible wound, fascinating as a crime. To comment on such a painting solely from the point of view of art is, we believe, not enough. The work bears directly on the Spirit, and that is why it torments us, because we see in it long-savoured resentment, the frozen will of sacrilege.”(7)

This is why the man without a face terrifies me. It is yet one more risk factor on the slope of contempt on which the most useless and vulnerable people are often placed.