Haiti or the risk of not belonging

Jonathan Boulet-Groulx is a self-taught student of humanity, a reporter of joy, a wandering photographer, a writer about things human, an artist who captures human fragility. His blog, Mwen pa fou, dedicated to the cause of intellectual disabilities in Haiti, has become a touchstone for those who wish to follow the inside story of Haitian life since January 12th and, in particular, the situation of people affected by intellectual disabilities in the rebuilding of Haiti, his second home. Since May 2009 Jonathan has lived in the small community of L'Arche Chantal, in the Cailles region of Haiti.

Have you ever heard of the “Maroons” (les marrons)? When slavery existed in Haiti, the Maroons were the people who managed to escape, fleeing to caves in the mountains. They formed small groups and were forced to hide to avoid the traps set by their masters in order to survive and remain free. Two hundred years later, in this country people often act like Maroons, here where belonging guarantees nothing except a difficult life. 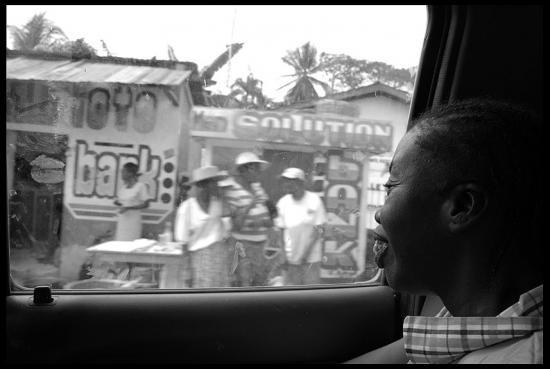 It is said that Haitians are a proud people – but proud of what? Make no mistake here: They are certainly proud, and with good reason, of their rich culture, of their history, marked by the genius of the revolution, of their collective memory - but of the country that exists now they seem rather to be ashamed: Three out of four would like to escape from this poverty which seems to have no end in sight. What is belonging without pride?

I live in Haiti, and I remember a woman in her mid-40s who, with tears in her eyes, told me about the country of her youth. It was so sweet … it was like snacking on sugar cane! The sugar has become bitter. She knows it, but she stays; choosing the hope of changing something, over escaping, over becoming a Maroon. For this great woman with a heart of gold, pride fades with the past. She clings to her memories. Her country is the past. The present is a place of bad news. Bad news multiplies here like mosquitoes in a humid zone; sometimes they are connected to natural catastrophes, but most often they are the consequences of bad management.

And what do the various media have to say about all this? The message of the media, local or international, is so negative that it incites “un-belonging” – “dis-connection,” rather than reinforcing the feeling of belonging. One after the other, these images of themselves, coming from near or far, make things feel worse for those who remain, like thorns being pushed into living flesh. A Danish newspaper editor warned one of his journalists: “It’s more dangerous [to be in Haiti] than to walk around naked in the most violent and most pro-Taliban province of Afghanistan.” This is certainly dis-information, but its effect, encouraging un-belonging, dis-connection, is the same as if it were true.

While the foreign media thus distort reality, the countries to which the media belong subordinate the truth to their own interests. Of the 700 young Haitians who receive a scholarship to study in France, how many return to Haiti? Few. Very few. Even though it would be so simple for France to send teachers here, as it did to Quebec, and thus raise the prestige of Haitian universities. France prefers to encourage the exodus of minds instead, and consequently erodes the feeling of belonging of young Haitians for their country, which, it seems to them, could never furnish them with an adequate education.

Young Haitian students know their history. By heart. They are proud of it and feel a kind of inevitable belonging, almost like a payment due their ancestors. But poverty encourages people to do what the Maroons did, and it pushes many among them to the point of encouraging them to abandon the people behind them.

We can see this clearly in communities like L’Arche, where the “other,” the stranger, the one who is different, is more than an object of charity who, by being the beneficiary of our assistance, can help us relieve our feelings of guilt. To help another, but above all to discover that this other one helps us too – despite his weakness, or in her weakness – all of this creates profound attachment and belonging. Isn’t it incredible that it takes being touched by such profound fragility to evoke this feeling of belonging to our fellow humans?

But this solidarity by itself is not enough to create a country, above all if it is not shared by the majority of the people, and still less by those in charge.

Attachment to humble places – hard, poor, real - is another very common form of belonging in Haiti. Thus the inhabitants of shanty towns prefer to stay in their neighbourhoods: because they belong to them. This belonging becomes dangerous when people shut themselves off in their difficulties, their poverty, their pain.

And what of the future? The median age of the Haitian population today is 18. The best-case estimate is that it will take more than 10 years to rebuild the country. When that is complete, Haiti’s vital core will consist of young adults in their thirties. It is, consequently, about time that we began to seriously reflect on the future of belonging to a country in which, according to her best writers, exclusion has, too often, been the motivator of laws.