The welfare state and the market state are now two defunct and mutually supporting failures. The fork in the UK road is clear. The UK government is facing major financial challenges. Comparisons with the Greek economy may not be entirely accurate but they reflect the extent of the financial pressures. This will impact the funding of social and health care supports and services and ultimately how people take care of each other and the environment. 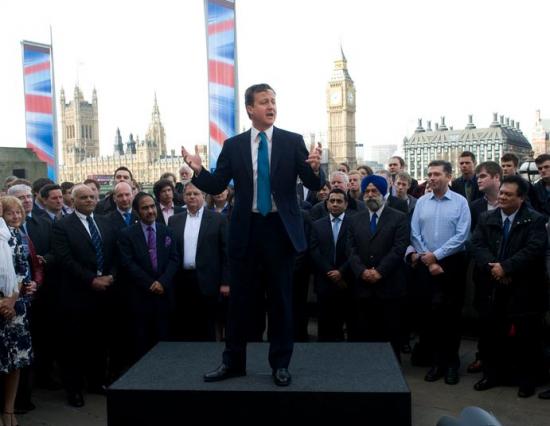 Now that David Cameron is the new Prime Minister of Britain, it is worth taking a look at his views on civil society. Cameron campaigned on a Big Society agenda. He spoke about the need to restore the balance among civic sector (Big Society), public sector (the Big State) and private sector (Big Business). Some of his ideas include citizen engagement, community ownership, self-help and public services coops. In principle, Cameron wants to do revitalize volunteerism, democratic participation, local networks, social cooperation and citizen involvement. His policies reject top down, government defined definitions of the problem. He wants to change the role of government so it supports not supplants civil society. He talks about making the so called Third sector the First sector.

In reading Cameron's speeches it's easy to assume his experience as a father of a child with a disability has deeply affected his view on the intractable nature of government imposed solutions. Sadly, Cameron's son recently died. It remains to be seen if that will fuel his political resolve now that he is PM. How the Big Society agenda unfolds in the UK, will provide us with the preview of how cash strapped governments including Canada will deal with its social challenges in the future.
The public intellectual generally credited with influencing Cameron is Phillip Blond whose book Red Tory - How Left and Right Have Broken Britain and How We can Fix It was visible everywhere during the recent campaign. Blond considers himself a true liberal upset with both big centralizing government (think Tony Blair/ Gordon Brown and New Labour) and excessive reliance on the marketplace (think Margaret Thatcher/ John Major and the Conservatives). Not incidentally Blond wife's was a key strategist in Cameron's campaign.

Blond criticizes both Thatcher and Blair. While coming from different political directions he asserts they created an atomized, segmented society which broke up the tapestry of relationship that hold a community together and which destroyed belonging. In a much-discussed essay in Prospect magazine in February 2009, Blond wrote, "Look at the society we have become: We are a bi-polar nation, a bureaucratic, centralised state that presides dysfunctionally over an increasingly fragmented, disempowered and isolated citizenry." In a separate essay, he added, "The welfare state and the market state are now two defunct and mutually supporting failures."

Blond writes compellingly about changing the UK's political culture oriented around individual choice and replacing it with one orientated towards relationships, community associations and, what we have described in our work as the living glue that binds us together - belonging.
Here are some excerpts from Red Tory which lays out the philosophy behind Cameron's Big Society agenda.

* One cannot have a vibrant culture disseminated from the top down.
* We would rather be stuck at home watching re-runs of Friends than making any.
* The extended family has been destroyed and now the nuclear one is vanishing as well. The vast majority of us exercise little or no power within our own communities; we work within parameters established by others, according to agendas imposed from above.
* Our culture at its best has always spoken to all of us, and from the highest to the lowest it has always called us to a universal vision of a shared commonwealth.
* The welfare state began the destruction of the independent life of the British working class. This new configuration of state and citizen made the populace a supplicant citizenry dependent on the state rather than themselves, and it aborted indigenous traditions of working class self help and mutuality.

Blond is not short of remedies either including tacking financial illiteracy, strengthening financial inclusion, lifting households out of poverty, and social investing. His solution oriented chapters include: The Moral Market, Creating Popular Prosperity and the Civil State.

The fork in the UK road is clear. The UK government is facing major financial challenges. Comparisons with the Greek economy may not be entirely accurate but they reflect the extent of the financial pressures. This will impact the funding of social and health care supports and services and ultimately how people take care of each other and the environment.

What is not clear is which fork the UK will take. Will they simply download the costs to the voluntary, non profit sector expecting the sector to make do with decreased financial support? Or will they develop a genuine partnership with civil society which strengthens their capacity to define their own problems; determine their solutions; mobilize their own abilities and assets; and decide whether and how they want government assistance?

We are fortunate to have a ring side seat in Canada with the UK as our learning laboratory. We can observe the exploration in the UK knowing we will face the same fork in the road in the next 5 to 10 years. How Cameron and his new political ally Nick Clegg tackle these challenges will provide insight and experience on what we should and should not to do.

To read a speech by David Cameron on social innovation which echoes some of the same themes: Download DavidCameron-PowerofSocial Innovation.